The Halo and Horns Effect

Affairs and the Halo and Horns Effect

The halo and horns effect is a common tendency to allow bias from the brief observation of a person (or even from a single trait or circumstance) to color the judgment of that person as a whole.

It’s understandable that we make these judgments about others, and it’s remarkably easy to fall into this trap in our day to day lives. However, our characterizations of others are based in our own world view and knowledge/understanding and are not necessarily formed from a comprehensive and objective evaluation of the whole person/situation:

Characterizing people in the extreme is similarly common in infidelity and people often make the following judgments and biases:

No matter how unfair, inaccurate, or unsubstantiated these assumptions are, people continue to make them. The faithful partner is often plagued by this same issue.

Halo and Horns: The Cheater

It can be baffling to listen to a faithful spouse talk about their cheater. They frequently vacillate between defending their cheater in one conversation and attacking them in another, often using a very narrow view of the cheater in both cases.

It’s concerning how often and how speedily these judgments change in response to the cheater choosing to return to the marriage (halo) or continue their relationship with the affair partner (horns).

Halo and Horns: The Affair Partner

It’s not uncommon for the faithful partner to privately imagine the affair partner one way (halo), but to describe them to others entirely differently (horns):

By couching the affair partner in these terms, the faithful partner can make sense of the rejection they feel (because the cheater was seduced and enticed by the all the fake sexy goodness) and also protect their view of themselves as only the sane, correct and superior choice for the cheater.

Halo and Horns: The Faithful Partner

Characterizing the cheater and the affair partner as good or bad isn’t where it ends. The faithful partner often similarly biases their own self-perception.

This exaggeration of their self-view -be it good or bad- can be indicative of how the faithful partner will react to the affair in general: it’s common, though problematic, for a faithful spouse to attribute the horns bias to themselves if they attribute the halo bias to their spouse (and vice versa). 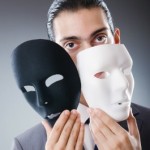 An affair highlights some different aspects of the cheater’s character and many faithful spouses are unwilling to face this.

As unfortunate as it is for the faithful partner’s reputation and image, the affair rather publicly reveals some significant weaknesses and failings in their partner and this can exacerbate a sense of bruised ego and public embarrassment. Many faithful spouses respond by refusing to acknowledge any prior behavioral patterns in their cheater, preferring instead to doggedly maintain that the affair is aberrant behavior - that of a ‘changed character‘.

In exposing the cheater’s flaws, faults, and wrongdoing to the world, the affair also suggests that:

When the faithful spouse wants to preserve the marriage (and that is the most common reaction), the now evident issues become problematic to that goal. They often struggle to justify their intent/wish to stay with the cheater to others, and to themselves, especially when they have identified and disclosed past patterns, abuses, and dysfunction in the marital history.

One might reasonably question why the faithful spouse is often more outraged by the cheater leaving the marriage than they are by any abuse or dysfunction they experienced during the marriage.

These newly evidenced shortcomings in the cheater can result in one (or more) of the following responses by the faithful partner:

Relatively underdeveloped personalities, most especially borderline personalities, have a hard time incorporating into consciousness seemingly contradictory aspects of the same person or thing. So, they unconsciously separate or “split” objects into two categories, seeing the “good” side of a person or thing as the part they find acceptable and the “bad” side of the person or thing as the part they find painful or unacceptable. And, it’s much more than just seeing both a good and a bad side to everything. They actually “split” a single entity into two opposing realities, conceptualizing for example a mother who has both a gentle and a terrifying side as alternately “good mommy,” or “bad mommy.” As a result, they will often alternate between over-idealizing and devaluing the same person.

Maintaining a belief that the horns have temporarily taken over the good spouse’s character seems entirely designed to support the narrative of, ” ... and that’s why it is reasonable for me to dismiss their treatment of me and seek to reconcile with my (real) spouse.”

Our character is a blend of our halos, our horns, and the less remarkable grayness in between. Infidelity doesn’t make a cheater wholly bad, any more than being faithful makes the spouse wholly good. Cheaters are not distinct and separate characters coexisting with the ‘real spouse’ in one body, and they do not morph into a good spouse/bad cheater character at will.

It’s a reasonable and intelligent way forward to expect change before you throw your hat in the reconciliation ring. However, you cannot expect real change if you cannot accept real flaws and contradictions. Take a realistic view of the cheater as a whole: Throw in the good, the bad, and the gray, and whizz it up until you see a homogeneous good/bad cheater smoothie. Take a sip of your cheater smoothie to see if you still like the taste.

If you’ve been gored already by the cheater’s horns allow yourself time to observe real and meaningful change before you reconcile. There’s no virtue in simply adjusting their halo, buffing it up with a quick spit and polish, and jumping in without a parachute.