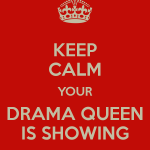 You’ve collapsed on the floor in a puddle of tears as you try to deal with your cheater’s ongoing affair, distraught and devastated by the bomb that has detonated slap bang in the middle of your life.

You’ve begged and pleaded for them to stop their affair, to come back to you, to rebuild your relationship, but you know that they are still in contact with the affair partner. It might be that they are trying to hide a continuing affair, or they might be flaunting it in your face with no apparent intent to stop. They might even be using their affair as a way to exit their relationship with you.

The pain is debilitating and you’re looking for comfort and for your cheater to say the magic words that will right your upturned world. Instead you hear,

“Stop being such a Drama Queen.”

This demonstration of their lack of compassion, empathy, and care is simply staggering, and your response is probably another Niagara Fall of tears.

So, is this devastation in response to your cheater’s affair really being an Affair Drama Queen?

The sudden and striking discovery of an affair in a committed, monogamous relationship can have devastating effects on the faithful partner. It goes beyond being hurt or upset, and it is more than the pain of rejection; it upends your understanding of your life, jettisons your most intimate support, and leaves your world view shaken.

Unfortunately, in so many cases the assaults don’t end there and can manifest as further harms in issues like the ones below.

There is often financial drain of the marital assets to support an affair which can have a far-reaching effect on the faithful partner’s financial stability now and into their future. An affair can threaten the lifestyle, home, family, and security of both the cheater and the faithful partner.

The affair partner is often given access to the children of the primary relationship during the conduct of the cheater’s affair. Children can be used and/or coached as alibis, they can feel as if they have to take sides, and they can start to develop a relationship with the affair partner. All of this can leave the faithful partner feeling wildly protective, jealous, and concerned for the well-being of their children.

The cheater who believes that they’ve found their soulmate rarely believes that their new Snugglesome-Hugglesome could ever be the carrier of something as distasteful and harmful as an STI. Ummhmm. It is sadly commonplace for a cheater to contract STIs from an affair partner and these infections are frequently passed to the faithful partner. Snugglebunny might well be be carrying HPV, chlamydia, HIV, herpes … and their STI’s can cause the faithful partner long-term health issues.

The faithful partner may be reluctant to get themselves tested for STIs. Not only are they dealing with the affair itself, but have to endure the humiliation and embarrassment of getting tested, and the stress and concern about potential health problems resulting from it.

It’s remarkably common for the other woman to make malicious contact with the wife of a cheater. These interactions are mostly characterized by vindictiveness, gloating, and poorly veiled jealousies, resentments and animus. They are fully intended to cause further pain. (Interestingly, this type of approach is rarely seen from the other man.) Most faithful partners trust their cheater and believe that this trust is warranted and well-placed. When your trusted, committed, and most intimate relationship explodes in a confetti of lies, manipulations, gaslighting, and broken promises, it also contaminates and poisons your view of other relationships and people.

Your emotional devastation is understandable, and it is valid.

Is Your “Affair Drama Queen” Showing?

On some level, cheaters love drama. Affairs are (in and of themselves) drama-ridden even if that drama is simply in the illicit nature of the affair, fear of being caught, or balancing the affair with their primary relationship.

Often the faithful partner who is hoping for a reconciliation with their cheater will express their emotional distress in full view of their cheater. The post End the Affair Strategies and the Backfire Effect explores how you might be thinking that this demonstration of your genuine upset might help bring your cheater back to you:

“Crying and being distraught in front of your cheater:

Because they can’t truly understand how much this hurts, so you have to show them. And when they really SEE it, they will be filled with remorse, compassion and love for you, and sweep you up and tell you how wrong they were, and beg you for forgiveness.”

End the Affair Strategies and the Backfire Effect

1. Ego Boost for Your Cheater

However much a determined cheater might be telling you that you’re being an affair drama queen, telling you just get over it, or to stop crying, or to stop being upset, there is a part of them that is being boosted by your emotional state. It validates that they are special or that they are desirable, and it feeds the high that many feel from having the power balance tipped in their favor. However, they are balancing that with avoiding the truth that they have caused your emotional distress by their selfish choices, and this can often cause them to keep their focus firmly off you and on their affair.

Your emotional response to your cheater’s affair is real, valid, and authentic, and it does NOT make you an Affair Drama Queen, however much it serves your cheater to label you that way. It’s important to recognize that this type of attack and dismissal of your emotional response is a common weapon in a cheater’s arsenal - they’ve spent quite some time creating a rationale for their affair that blames you, and this is a further extension of that justification. Unfortunately, the manipulations, accusations, and blaming in which a cheater engages can and do have significant, scarring, and long-lasting negative effects on the faithful partner.

Disengaging From Your Cheater

Faithful partners find their self-worth destroyed, their ability function impaired, and their coping skills severely tested and depleted. You will be vulnerable and susceptible to manipulation and may find that your cheater has become aggressive, cunning, and spiteful towards you. It’s not uncommon for your emotional flooding to manifest as an inability to stand up for and protect yourself, especially when dealing directly with the cheater.

It is important for your own protection and well-being that you don’t continue to involve yourself in your cheater’s affair drama. To stay healthy you need to turn your energies and focus to yourself and away from your cheater. For example, this might mean:

Your emotional distress is valid but your cheater doesn’t need to have the satisfaction of seeing it - instead, seek the support of people who will care for you through this mess.

Invest your time, care, and energy in yourself. Start living a life that takes you closer to your own goals and dreams for yourself, even if that goal is to enjoy a daily cup of coffee in the garden, relaxing with a Sudoku puzzle. Little things add up - take the space to regenerate your sense of self and avoid as much additional incoming damage as you can.

We have to dare to be ourselves, however frightening or strange that self may prove to be.

Putting yourself in reach for the cheater to further damage your well-being is like grabbing the rope and tying yourself to the whipping post.

The most painful thing is losing yourself in the process of loving someone too much, and forgetting that you are special too.